Why do you participate in user support?
Have you ever wondered why any of the people who answer support questions, and write documentation take the time to do it?

This is a followup to a post I wrote about dealing with disgruntled users.

Firefox is a tool of Mozilla to influence an industry toward open standards, and against software silos. By having enough market share in the browser world, web-developers are forced to support open standards.
Users will not use Firefox if they do not know how to use it, or if it is not working as expected. Support exists to retain users. If their experience of using Firefox is bad, we’re here to make it good, so they continue to use Firefox.

That experience includes user support. The goal is not only to help users with their problems, but remove any negative feeling they may have had. That should be the priority of every person participating in support.

Dealing with disgruntled users is an inherent part of user support. In those cases, it is important to remind ourselves what the user wants to achieve, and what it takes to make their experience a pleasant one.

In the end, users will be more willing to forgive individual issues out of fondness of the company. That passion for helping users will attract others, and the community will grow.

I’m happy to announce that I’ve started working for Postbox, doing user content and support.
This means that I won’t have time for some of my commitments within Mozilla. Over the next while, I may be cancelling or transferring some of my projects and responsibilities.

I recently listened to an episode of the Ctrl-Walt-Delete podcast, in which Walt Mossberg and Nilay Patel talked about web browsers vs native mobile apps. There was something Walt said that I have to comment on, because I disagree with it, and a tweet just isn’t enough. 🙂

When explaining why most people use native mobile apps, he argued that the main reason is because an app (when done right) offers a more focused experience, He cited Google Maps as an example.

I’m not saying that’s the only reason people use native mobile apps. I think most other differences have a minor effect on the user’s decision, and how fast and convenient it is to get to the app is probably the biggest factor.

This past week, Mark Surman Executive Director of the Mozilla Foundation was on one of my favourite TV shows – The Agenda with and Steve Paikin. Here’s the video:

This is something I’ve been wanting to write about for a while. In many community driven support venues, I see some bad patterns in the way users are treated. People who may be knowledgeable about Firefox end up giving bad user support, because they’re not being empathetic or approaching support with the intent of helping users.

Those factors tend to create a community of geeks lacking the social skills to help novice users. Most people in the community just haven’t considered this. If a fellow user is being uncivil, it’s natural to flame back.

I’m not saying the customer is always right; I’m saying don’t argue with them.

Quantity vs quality is hard. With SUMO focusing on making sure every question gets answered, making those answers better quality can take time away from another user getting any answer at all. One good way to solve that is snippets that provide good detailed explanations, instructions, and links. Right now, you can use an extension called Clippings, which allows you to automatically paste canned responses you’ve saved. It works on both Firefox and Thunderbird, so you can use it on web-forums as well as mailing lists and newsgroups. You can find a list of canned responses to use on the Mozilla wiki. Soon the SUMO support forum will have canned responses built in.

What should Mozilla do when a volunteer is not being empathetic?

That’s a natural extension to the above issue. I have some scattered thoughts on that. I still need to organize them, and will probably start a thread in the SUMO community forum to discuss.

If you’ve made it this far into this blog post, thanks for reading.

For some specific bugs, I’ve added myself to the CC list, because I’m interested in knowing when the bug is fixed (and maybe when the target has changed). Problem is: because there has been a lot of discussion in a few of those bugs, I’ve been getting a lot of bugmail that I’m not interested in. I don’t want to remove myself from the CC list, because I still want to be notified when the bug is fixed.

I don’t know if I’m the only one with this issue, so I thought I’d share how I fixed it.

In my Bugzilla Preferences, there is an Email Preferences tab that allows me to choose what changes I get emailed about based on my relationship to the bug. In it, I turned off most options for when I am a voter of a bug. Then, for any bugs in which I only care if the bug is fixed, I vote for it instead of adding myself to the CC list.

I made that change over a week ago. So far, so good.

Over the past few years, I’ve noticed that I’ve developed a habbit: Whenever I see a browser in the media, be it television shows, commercials, screenshots on web sites, I automatically check to see what browser and OS is being used.

Very often, Firefox is the browser being used. Today, on CNN.com, I saw another instance. 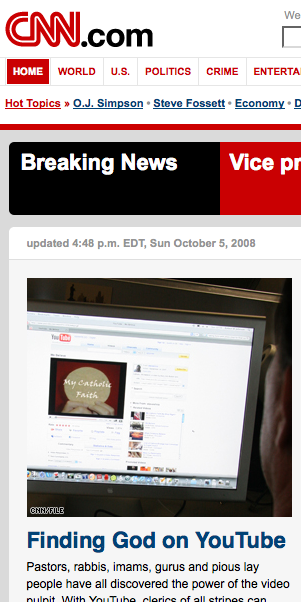 It’s a little hard to tell, but there’s a Firefox icon in the bottom left of the dock, the tab has a favicon, and the search bar has a favicon. Ergo, that’s Firefox, not Safari. CNN used to use Netscape 7 in their screenshots. (Although, that could have been because of the AOL-Time Warner umbrella.)

Years ago, the Mozilla Suite was on the Simpsons: 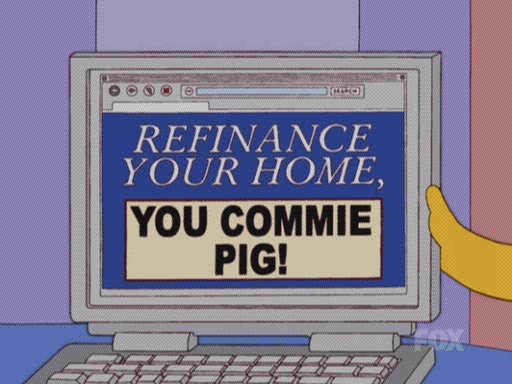 If it hasn’t already been started, it would be cool if we had a log of all instances Firefox has appeared in the media.

I just read a post by Robert Kaiser in mozilla.dev.general, that contains a great link:

I see it as something like www.googleityoumoron.com, but for web developers. It might be useful for users of Mozilla-based browsers, other than Firefox.

The Mozilla Developer Center also has a good article on Browser Detection and Cross Browser Support, if you come across a website, that is too specific in its browser sniffing.

Here’s a question: Using any of Firefox, Thunderbird, SeaMonkey, the Mozilla Suite, or Netscape, have you ever purposely clicked on the ‘Remove All’ button, in the password manager?

Follow up question: Have you ever clicked on it by accident?

Clicking on it by accident, is easy, when it sits right beside ‘Remove’ button. Luckily, the closest I’ve come to that, is removing all cookies, not passwords. The scary part is that there is no “Are you sure” prompt, asking for confirmation. One accidental click, and ‘poof’, data is gone.